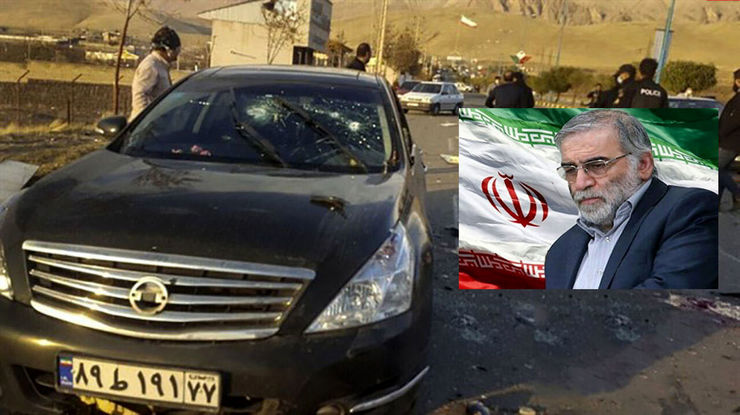 Global reactions to the assassination of Iran’s nuclear scientist continue, and many countries, organizations and institutions have condemned this terrorist act.

The assassination of Mohsen Fakhrizadeh, a nuclear and defense scientist in Iran, has led to a wave of strong condemnation of this terrorist act by Russian officials and institutions and scientific figures.

Russia strongly condemned this terrorist act and advised the people and officials of the Islamic Republic to exercise restraint and react appropriately.

Assassination of Martyr Fakhrizadeh with the green light of America

Russia’s Deputy Representative to the United Nations, Dmitry Polyansky, also condemned the terrorist act, saying that the assassination of Fakhrizadeh was carried out with the green light of the United States for “foreign political assassinations.”

“What the New York Times analysis tells us is a reflection of the United States’ readiness to give the green light to overseas political assassinations,” he wrote on Twitter.

“This is not something that a democratic country can show off,” said Russia’s deputy ambassador to the United Nations.

Vladimir Sazhin, a senior fellow at the Center for Middle East Studies at the Russian Institute of Oriental Studies, said that the perpetrators of the assassination of Martyr Mohsen Fakhrizadeh were linked to the United States and Israel.

According to IRNA, Sajin, a leading Russian expert on Iran, told Russian radio station Gavarit Moscow that the assassination of Mohsen Fakhrizadeh was not unlikely to have been organized by stakeholders from other countries, and that it was possible that the United States and Israel were involved. Are involved.

He noted that at present, Donald Trump, who is in the last weeks of his administration, is making every effort to make it difficult for the Biden administration to decide on Iran.

The Russian expert called the connection of these efforts of the Trump administration with the assassination of Shahid Fakhrizadeh possible.

The shameful act of assassination of the Iranian scientist “Mohsen Fakhrizadeh” by US and Israeli mercenaries has been widely covered by the Russian media.

Some of these media outlets, such as RIA Novosti, Sputnik, Tass, and RT and NTV, have published dozens of news items.

Russia’s international news agency RIA Novosti described the assassination of an Iranian nuclear scientist as an attempt to destabilize the Middle East.

“Anything related to the nuclear program and innovations in Iran is considered a potential threat by Israel,” said Sergei Demidenko, a professor at the Institute of Social Sciences of the Russian Academy of National Economy and Public Administration. So the first suspects in this situation are Israel and the United States.

Radio China: Israel is the main suspect in the assassination of Martyr Fakhri Zadeh

China International Radio In a recent analysis of the assassination of Martyr Mohsen Fakhrizadeh, he wrote that although Israel has denied involvement in the assassination, it’s most skeptical of the regime.

Israel has assassinated an Iranian scientist

“As for the assassination of Qassem Soleimani,” Amos Yadlin, former head of the Israeli military intelligence service (Aman) and current head of the Israel Institute for Internal Security Studies (INSS), told a news conference at the Israeli Media Center. The United States has claimed responsibility, and Iran has fired dozens of missiles at US bases in Iraq. No one has claimed responsibility. So Iran is likely until the last days [ریاست جمهوری دونالد] Trump [برای انتقام] “He should wait because he does not want to give him enough time to abuse this revenge to carry out the attack.” Israel is responsible for Fakhri Zadeh’s assassination.

“Avoiding Tel Aviv from taking this action has given Tehran an opportunity not to have to react immediately and loudly,” he said.

The former head of Israel’s military intelligence service said: “The Americans quickly told the New York Times that Israel [‌ترور] Did. “Any further evidence that helps Iran decide to take revenge on Israel is wrong.”

A few hours after Fakhrizadeh’s assassination, Yadlin joked about the tasteful remarks of Benjamin Netanyahu and advised the current regime officials to shut their mouths and not reveal anything because they have already spoken too much.

“He was killed at this time because of the many and complex operational considerations, as well as the specific limitations and capabilities, because such a precise operation required long-term and extensive planning,” Yadlin said of the timing of Fakhrizadeh’s assassination. “If [غیر از اسرائیل] Other parties, such as the United States, Saudi Arabia, or the opposition [حکومت] Iran in this [عملیات] “They were involved, it took more time and it required special conditions for all parties to give this green light to this precise assassination.”

To the assassination of Martyr Fakhri Zadeh

The EU foreign policy chief criticized the assassination of Dr. Mohsen Fakhrizadeh, a prominent nuclear scientist and our country’s defense industry, and stated that this was a criminal act.

“Unfortunately, this is not a way to solve problems,” EU foreign policy chief Joseph Borrell said on Tuesday at a roundtable discussion on EU foreign policy developments over the past decade, according to Berna. We cannot prevent Iran from becoming nuclear by eliminating its nuclear experts and scientists.

Without directly referring to the perpetrators of this tragic loss, he said; Some do not want Burjam to be revived, and this is while we tried to keep this agreement alive despite the withdrawal of the United States from Burjam.

The spokesman for the European Union’s Foreign Action Service last Saturday issued a statement calling the move criminal and against EU principles of respect for human rights.

And we are negotiating

A French Foreign Ministry spokesman on Monday night reacted to the assassination of Iranian nuclear and defense scientist Mohsen Fakhrizadeh.

A spokesman for the French Foreign Ministry said: “We are concerned about the attack that killed Mr Fakhrizadeh. “In the tense situation in the region, we are closely monitoring the consequences in Iran and the region.” The French diplomat continued: “We demand restraint and the maintenance of channels of dialogue and negotiation. “In the current context, we are emphasizing our demands to avoid escalating tensions.”

Abdullah al-Moallem, Saudi Arabia’s representative to the United Nations, said in an interview that Riyadh did not accept the terror policy at all. “It simply came to our notice then.

“Any Muslim scientist who is attacked will harm the entire Muslim Ummah.”

Al-Moallem, while making no mention of the condemnation of this terrorist act, called on Iran to exercise restraint and take no action, claiming: “An emotional response will not have positive results. “We urge Iran to show the international community its goodwill regarding its nuclear program so that it does not endanger its children and scientists in this way.”

He also called Iran’s plan to increase the level of enrichment in response to the assassination of Shahid Fakhrizadeh “irresponsible” and regardless of the consequences.

The UN envoy continued his claims, saying that the Saudi government has always tried to reconcile and bring peace to the region, but the other side [ایران] By its destructive actions and sending weapons and missiles to its allies, it has prevented these efforts from succeeding. The Saudi Foreign Ministry has not yet taken a position on the “assassination of Martyr Fakhrizadeh.” However, all the Arab Gulf states, including Kuwait, Bahrain, the UAE, Qatar and Oman, have issued official statements condemning the assassination.

The Bahraini Foreign Ministry on Monday evening condemned the assassination of Iranian nuclear scientist Mohsen Fakhrizadeh, and issued a statement stressing “the need to coordinate efforts to reduce and prevent tensions in the region, as well as to protect security and stability.”

The blood of the martyrs makes him stronger

As regional and international reactions to the assassination of Shahid Fakhrizadeh continue, the condemnation of this crime and the analysis of its grave consequences continue to rage among Pakistani leaders, thinkers and political officials.

Hojjat-ul-Islam Mohammad Afzal Heydari, Central Secretary of the Pakistan-based Shiite School Alliance, condemned in a statement the assassination of Martyr Mohsen Fakhri Zadeh. Asad Abbas, a Pakistani political analyst and researcher, also condemned the heinous crime against the Zionist-American elements: “The blood of the martyrs makes the tree of Islamic resistance stronger.” According to Sada-e Azadi news agency, “Farhatullah Babar” is a former senator and one of the senior leaders of the Pakistan People’s Party, Senator “Shiri Rahman” is one of the leaders of the People’s Party, Dr. Mufti Golzar Ahmad Naeemi, director of the Naeemiyah community and one of Pakistan’s Sunni leaders, also strongly condemned the terrorist act of martyring the Iranian scientist as a clear violation of international law and human rights.