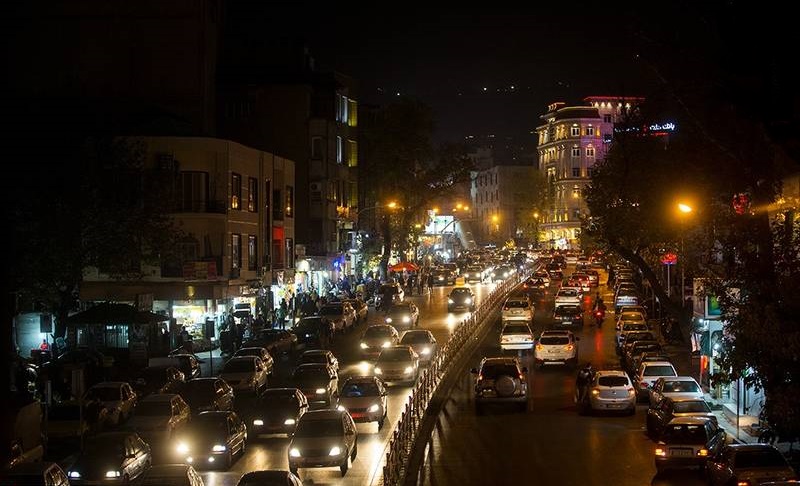 According to Tejarat News, but what is the story of adjusting part of the lighting in Tehran? Mustafa Rajabi-Mashhadi, deputy director of Tavanir Company and spokesman for the electricity industry, told Hamshahri about the cause of the blackouts on the main thoroughfares and highways when traffic restrictions were imposed: “They use gas fuel to supply electricity. The increase in consumption is effective in supplying fuel to power plants, and we have to use secondary fuel.”

But why was this not reported? In the past few nights, cars traveling after 9 pm suddenly encounter dark passages and highways, an issue that has been widely criticized by citizens and city officials.

Kourosh Jedi-Thani, CEO of the Traffic Control Company of Tehran, complains about this issue and tells Hamshahri: “We are talking about the fact that when our friends in the Ministry of Energy and Tavanir Company decided, they should have informed us as well. In any case, we are responsible for traffic on the roads of Tehran, and the Deputy Minister of Transportation and Traffic must be held accountable. “If the decision was made at the macro level, we should have been informed.”

He continues: “With the lights off, there is insufficient visibility for cars on the highways, which leads to a car accident with a pedestrian, a car with a car and overturning. We are also seeing an increase in the theft of municipal equipment, especially in the case of smart equipment or fiber-optic theft, and so on. We also have an increase in the destruction of municipal equipment. Also, the dangers that happen to the citizens include the impossibility of pedestrian traffic; “Both at the level of passages and at the level of intersections.”

How the plan to reduce or adjust the lighting of roads and highways has been implemented; When the officials of Tehran Municipality are unaware of this issue and the Rahvar police have announced that they are against the implementation of this plan.

Jedishani announces the opposition of Tehran Municipality and states: “In recent months, the lighting of several of our thoroughfares, such as Azadegan and Imam Ali highways, has been turned off. Especially on the Azadegan Highway, which has become a slaughterhouse.

We also informed the deputy governor for security and law enforcement and sent a letter to them from the deputy director of transportation and traffic, because Azadegan highway is the route and the artery of the ring road around Tehran, and most of the time there is heavy vehicle traffic. it is dangerous.”

Traffic on roads and highways that are dark and look like an abandoned city has nothing but surprises and worries for the citizens.
“You see, we were really surprised by the gas consumption of the people, and consumption has increased a lot,” said Tavanir, the company’s vice president. In fact, it is impossible not to implement new decisions.

In the coming days, if we have to cut off the electricity to people’s homes in these coronary conditions, the situation will become very difficult. However, refueling has its limitations, and we need to help each other resolve this issue in the next month or two. In my opinion, if we have a 10% reduction in electricity and gas consumption, which is possible with simple measures, these problems will be solved in general.

The solution is for people to reduce the temperature of their home or workplace by one degree, which will affect up to 6% of energy consumption. “It is enough for us to wear some warmer clothes and reduce the heating equipment a little bit, it will definitely have a good effect so that we can return to normal conditions again.”

“The current level of lighting is sufficient for security reasons,” he said, referring to widespread criticism of the plan to turn off the lights. “Of course, we did not cut off the electricity in the streets. In fact, we cut off the lighting of the main thoroughfares, and during the curfew, only cars with lights are on.”

Vahid Norouzi, an expert in urban management, does not have such an opinion and emphasizes: “I am sure that the order to turn off the traffic lights and highways in Tehran at 9 pm is one of the emotional decisions and actions that do not have even two pages of study and logical and technical justification. “Like day, it is clear that this hasty and superficial decision will reduce drivers’ visibility and increase accidents.”

Integrated urban management is one of the issues that is often implemented in developed countries and has had clear results. In Iran, however, the issue of integrated urban management has been raised for many years, and its bill has been sent to the Islamic Consultative Assembly, but has not yet been approved. While with the implementation of integrated management, the city is managed by the cooperation and coordination of all responsible institutions and by the city management.

“We made a macro-level decision,” said Tavanir, the company’s vice president. “In fact, we coordinated with the Ministry of Oil, the security officials and even the judiciary, and we decided in a meeting like this.” “I do not think that the security and judicial friends will confirm this, because when the traffic lights and highways are turned off, the violations increase many times and the police have announced that they have not coordinated with them,” said Jedishani, CEO of the Tehran Traffic Control Company. . »

When will the road lighting adjustment plan not be implemented? “As soon as the consumption of domestic gas decreases, the share of gas in power plants increases, and as the weather warms up a bit, the restrictions will be lifted,” said Rajabi Mashhadi. “Of course, if we do not comply, the coming days may be more difficult.”

Sardar Mohammad Hossein Hamidi, Chief of Tehran Rahoor Police: For several days now, the lighting of highway highways has been cut off from 9 pm to 4 am, and some people think that this is done by the police. The police have no duty to cut off and connect electricity, and we are definitely 100% against this. Officials have sent letters to Tavanir stating that they have problems with electricity supply and that the infrastructure needs to be rebuilt, so they turn off the lights at some times at certain times.

This will definitely cause traffic problems and increase the number of accidents and create many problems for the people, and therefore we are pursuing to solve this problem as soon as possible. In general, one of the problems of Tehran is the lack of adequate lighting in some busy thoroughfares, such as around highways, which leads to accidents due to the type of coverage of pedestrians, and the police, as a defender of human rights, always seek to ensure the level of lighting in Tehran. Reach the maximum.

For this reason, in some incidents that are caused by the lack of lighting, we have introduced the officials of the organizations and the trustees as the culprits in the accidents to the judicial authorities, and we continue to do so. In the case of the recent blackouts, however, the authorities are powerless, and to strengthen the infrastructure, it is necessary that we try to work together to resolve this issue as soon as possible.