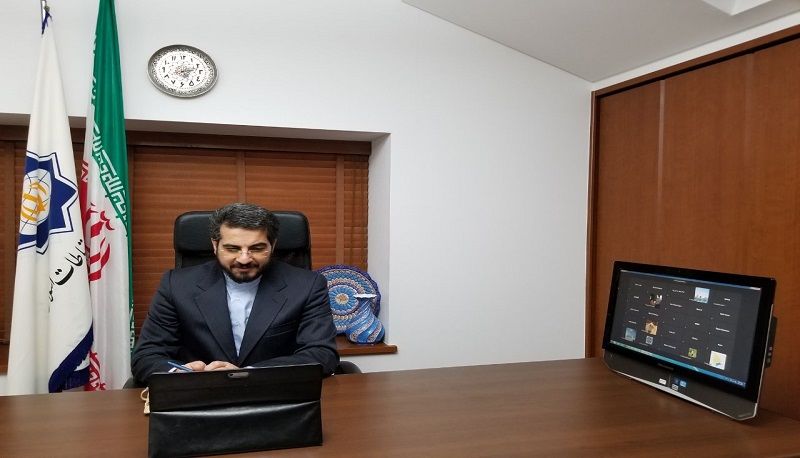 According to Borna, in the past three years, at the same time as Yalda night, a cultural consultation welcomed a large number of Iranian and Japanese cultural friends and enthusiasts, and held a Yalda ceremony in person, which this year due to the prevalence of corona and the need to maintain protocol. Health and Audience Health held the program virtually.

In this program, Kazone Oasaki, a prominent Japanese artist who is fluent in Iranian traditional music, especially santur, gave a lecture and introduced this art in the form of PowerPoint, and in a part of the program, he showed a live performance of some santur pieces.

At the beginning of the meeting and after introducing some activities, programs, publications and books of cultural consultation, Divasalar while congratulating this ancient day to the Iranians living and also the participants said: Iran and Japan experience a long and historical history of cultural cooperation. It is more than 1300 years old and fortunately the positive effects and many cultural commonalities can be recognized between the two countries, including Yalda night in Iran and St. Tuoji or the winter revolution in Japan, and we are very happy to have this program. With the focus on introducing Iranian traditional music as one of the most important and well-known Iranian arts in the world.

He further referred to the history of this Iranian art and added: The history of this art dates back to BC and is considered one of the most beautiful and pleasant music in the world and has attracted many fans in Japan. During the last 2 years, Cultural Counseling has conducted two sessions of Iranian traditional music week with the cooperation of various Japanese departments and institutions, and today, in this program, we will learn more about this art through the words of a Japanese artist familiar with Iranian music. .

Referring to the presence of a significant number of Japanese Persian students in universities and various educational centers, including cultural counseling, Divasalar also added: “Counseling, both in person before corona and afterwards in cyberspace, offers training courses.” It is still going on and in this program, two dear Japanese Persian students will recite poems from Hafez’s Divan, which is an inseparable part of the Iranian Yalda night, along with Japanese explanations, and we hope that it will be resolved and eliminated. The departure of this vicious virus, as soon as we can be in the service of Japanese and Iranian enthusiasts and cultural friends in this country.

In the other part of the program, the Japanese artist Iwasaki gave a speech and thanked the cultural consultant for inviting him to the program on Yalda night and said: Which is an Iranian instrument and there are images of Mesopotamia in the 5th or 6th century BC, which is very similar to this instrument and probably in the Sassanid period with its evolution has become a modern form.

He went on to discuss the history of Iranian traditional music with a focus on the santur and performed a piece in the Shoor instrument that was applauded.

In another part of the program, he answered questions and at the end performed beautiful pieces of this instrument for the participants.

Also in separate sections, two Persian students of cultural counseling recited verses from Hafez along with their Japanese translation, and in this regard, Tamuki Goto recited a poem:

There is no solitude in the heart, instead of talking about opposites / the demon Cho goes out and the angel enters

The words of the rulers are the darkness of the night of Yalda / the light of the sun, the atmosphere that rises

And Tatsuvu Hamaguchi, who lived in Iran for 3 years about 40 years ago and has sweet memories of that time. Poetry:

I said I am sad for you, I said you will be sad / I said that it will be my month, I said if it comes

I told him to look at the imagination / They said that it was night and he read it the other way.

Also, in different parts of the program, videos related to this night and various images in this field were broadcast.