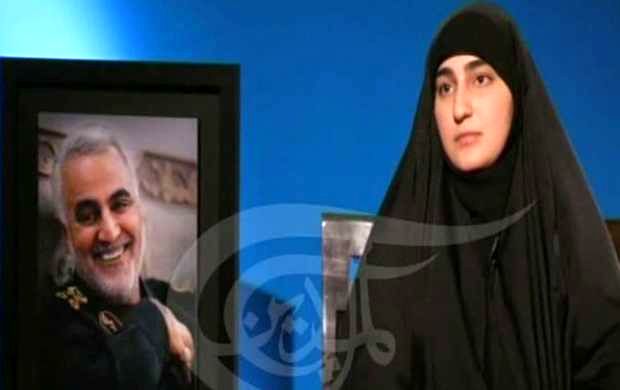 “Zeinab Soleimani”, the daughter of Sardar Haj Qassem Soleimani, the commander of the Quds Force of the Islamic Revolutionary Guard Corps, spoke to Al-Mayadin network.

The daughter of Sardar Shahid, in response to a question from Ghassan bin Jeddou, the director of Al-Mayadin network, who said that you are the closest person in terms of morality and behavior with the patriarchy, said that no one can be compared to Sardar Shahid and he was a disciple of their father. .

Emphasizing that he and his father spent a lot of time together and had a deep emotional relationship, he explained: “My father was seriously concerned about solving the problems of the martyrs’ families.” He was always concerned about these families, and I acted as a mediator to alleviate the problems.

He continued: He had a special awe and intelligence on the battlefield. My father had a kind heart and because of this trait, he came out of the field full and victorious in different situations.

The daughter of Martyr Soleimani continued: My father was not only a military and political commander who only gave orders, he was also a conqueror of hearts.

He pointed out that before Operation Amerli, he had asked his father, Martyr Soleimani, to stay with him and his family for a few more days. are?!

Haj Qasim’s life was full of various dangers from his enemies. Wherever he was, it was full of enemies. At one point, even two American fighters were trying to target my father’s plane.

Martyr Reza Khorami was always present as a supporter of my father.

One of the reasons why my father was so strongly involved in the Syrian conflict was that he saw the Lebanese-Iranian-Syrian border as a common threat.

In fact, Hajj Qasim jointly defended Syria and Iran. In his view, there is no difference between the people of Yemen, Iran, Syria, Lebanon and Palestine.

He added: “My father was in charge of the forces that bear the name of Palestine.

The issue of Palestine and its people were two issues that Hajj Qasim was very concerned about, and today we see that the Palestinian resistance forces have instilled fear in the Israelis.

The Palestinian people and resistance must know that the legacy of Hajj Qasim will not allow the Zionist occupation to continue.

Hajj Qasim established the resistance in Lebanon, Iraq, Syria, Palestine and even Iran and gave it power and cohesion.

Abu Mahdi once told me that he asked God that if something bad happened to Hajj Qasim, he would not be in this world immediately after him, because he could not bear the loss of Hajj Qasim for a moment.

After the martyrdom of Emad Mughniyeh, my father was so sad about this incident that we (the family) could not talk to him for several days.

Before his martyrdom, my father wrote a 10-page will. He wrote after each phrase: Forgive me, you have bothered me in this worldly life.